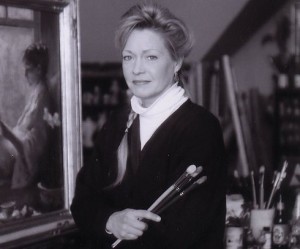 “I have always been moved by the perception of beauty and fascinated by its expression – how the artist’s skill and imagination can both capture and transform visual experience. I try to work in a language that is intelligible to the sensitive viewer while exploring the boundaries between representational imagery and pure design.”

Anita I. Johnson spent her early years in Bucks County, Pennsylvania, where she was influenced by the work of local impressionists such as Daniel Garber and Edward Redfield. She attended the Pennsylvania Academy of Fine Arts for three years, studying principally with Arthur DeCosta, before moving to Florence, Italy. In Italy she studied with Charles Cecil and at the Uffizi Archives of Drawings and Prints. Returning to the United States, she relocated to New England and studied with Boston artists Paul Ingbretson and David Curtis.

Ms. Johnson’s paintings present a richness in form and tone, with a body of work encompassing landscape, still life, and portrait formats. She has won prestigious awards for her landscapes of France, Italy and New England, as well as for her still lifes, which explore challenging designs featuring Asian motifs.

Her work has been seen at many exhibitions in New England, including the Copley Society of Art, the Rockport Art Association, and the North Shore Art Association. She has shown at the Salmagundi Club, the Allied Artists of America, and the Hudson Valley Art Association in New York. She has also exhibited in Italy and Pennsylvania.